Alice shuffled painfully across to the window and drew back the grubby lace curtain. Her 2nd floor flat, her perch as she liked to call it, overlooked the residents’ car park, and a little further on, the playground. The sun was trying to penetrate the thin grey cloud, but could only manage a pale, watery version of its true self. All things fade, she thought. That’s what I’m doing up here, slowly fading away. She wondered which would deteriorate and crumble away first, her body, or the wheel-less, once-white estate car dumped in the corner of the car park; long abandoned, continuously vandalised, rusting away, slowly, surely, steadily. All things fade…

At least her eyesight remained keen and sharp, and the one pleasure she could still partake of was watching the children in the playground, rushing from swings to roundabout, clambering up the witch’s hat, dangling from the monkey bars. She heard them squealing with delight, loudly demanding mums, dads, grannies, child-minders to look their way and acknowledge their bravado. She liked to watch the children, so carefree, so active, so alive. She also kept an eye on the adults, calling encouragements or warnings to their offspring, and then chatting and passing the time of day with one another.

And always, within in a short while, Alice drifted back to her time as a young mother, proudly walking out with her twin boys, not that there were such adventurous places as playgrounds to visit when her boys were youngsters. But she would stride out with the double pushchair, to the shops, along the canal towpath, past the field with the horses… and now, many years hence, in far off corners of the world, her boys had boys of their own now. Sometimes she tried to imagine them out and about, laughing, playing – perhaps in a playground like the one she watched over from her window.

And when her mind wandered, as it invariably did, she would let the lace curtain drop, turn and shuffle back to her armchair and retreat into her memories of those long, lost years, where treasured recollections and bittersweet thoughts were her only refuge. Before too long she would sink into a fitful, self-pitying sleep; alone, isolated, supported and sustained within the confines of her threadbare chair.

Today though, all she could see was a huge advertising billboard, fastened to the playground’s sturdy, green railings. It was not there when she last peered out from her perch; yesterday, or was it the day before that? Well that wasn’t going to fade away any time soon. She could see nothing of the playground – swings, slides, climbing frame, see-saw, all completely hidden from view. The obtrusive billboard loudly declared NEVER BE AFRAID TO REINVENT YOURSELF. Below this was a rough outline sketch of a human figure which looked as though it had been left half finished. To the right, a dinosaur, wearing a brightly coloured crash helmet, was leaping out of the advertisement. It could have been a dragon though, thought Alice, it had wings and a forked tail. Anyway, the whole thing looked ridiculous! What on earth was it all about? And what was it doing there? Who gave permission for it to be put up? Reinvent yourself – what do they think we are, robots, machines, computers? What is the world coming to? Alice remembered her recent hospital appointment. The young doctor wanted to put artificial bits into her, replace one of her hips. The doctor said that would get her mobile again, free her from pain. No thank you. Nobody’s meddling with my body. I’ll make do with what the Good Lord gave me.

Alice was surprised by how angry and frustrated she felt. Her one glimpse of the outside world, her one pleasure in life, hidden from view, denied to her. She let the curtain fall, turned away and shuffled back to her armchair. As she slumped down, she sighed deeply. She wondered how many children were scrabbling, sliding, swinging and squealing in the playground today – behind the billboard. And how many adults were watching over their sons, daughters, grandchildren? And what could she do about the blocked view? Nothing. One lonely old lady, painfully fading away in her 2nd floor flat. Deflated and demoralised, Alice drifted into sleep.

And as she slept, Alice dreamed. She was gazing out of her window, it was night-time and the billboard was glowing. The dragon’s head was swaying from side to side and it was wildly thrashing its tail. The human figure outline had been coloured in and resembled an elderly, but sprightly lady. This figure jumped right off the billboard and walked to the entrance of the playground. It pushed open the gate and stood on the path inside, gazing towards the play equipment, which of course was still hidden from Alice’s view. The figure then disappeared behind the billboard. That’s where the benches were, for the adults to sit, while they watched their children play and chatted together. And now the words were lighting up, pulsating one by one – NEVER (a fiery red), BE (grass green), AFRAID (vivid orange), TO (turquoise), REINVENT (sky blue), YOURSELF (as golden as the summer sun). As the final word faded, the first was illuminated again. Over and over the message played. Alice could not recall how many times she saw it repeated by the time she awoke.

It was morning, Alice had dozed off in the afternoon and slept right through the night in her armchair, and very surprisingly, felt completely refreshed. The sun was shining upon the car park from a cloudless sky. She stood up, slowly, carefully, crossed the room to her tiny kitchen and made herself a cup of tea. She rummaged through one of the drawers and fetched out her address book. As soon as she had finished her cuppa, she was going to phone up that nice doctor at the hospital. 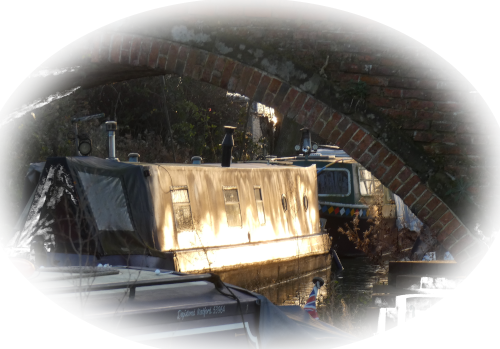